Home News A new premiere for children on November 12th 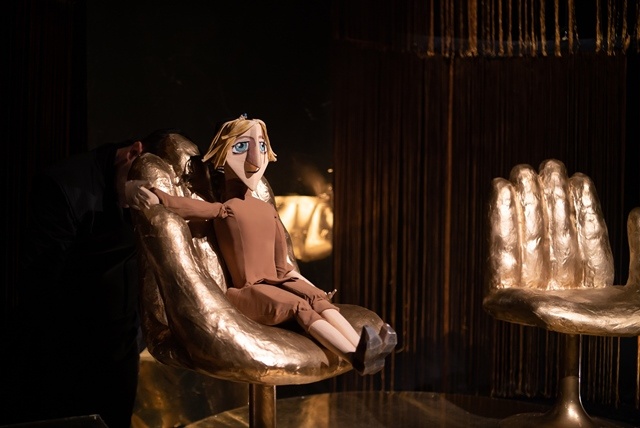 A new premiere for children on November 12th

November 12th will bring a new joy for our young and not so young spectators. The director -Tsveti Penyashki, the composer - Milen Apostolov and the set designer - Yasmin Mandelli will take us to the magic world of "Jack and the Beanstalk". Tsveti Penyashki has written the dramatization of the classic English fairy tale and our beloved actors - Bilyana Raynova, Maria Dzhoykeva, Kaloyan Georgiev and Stanislav Matev will play the roles.

Once upon a time, when the world was young and the people were doing whatever they want because everything was good, there was a boy named Jack…

You’re about to find out in the latest performance of State Puppet Theatre - Stara Zagora.

The premiere will take place at 11 o’clock on Saturday – November 12th.

The Nymph PREMIERE On February, 10th and 11th at 19:30 "The Nymph" is a puppet dance-show for adults based on the so called fairy tale written by Ran Bosilek and the folk tale "Vida Nymph ". Director: Iveta Georgieva – a debut Stage de

Here are some photos from the fourth day of PIERROT 2019. Photographer: Teodora Todorova

We have received a congratulatory letter from the Minister of Culture - Boil Banov on the occasion of the opening of International Puppet Theater for Adults Festival Pierrot 2019. We are grateful for the kind words and support! We would like to share

Here are some photos from the third day of PIERROT 2019. Photographer: Teodora Todorova

The scheduled presentation of The Last Man on October 17 is rescheduled for the next day - October 18, 2019 at 19:30. Anyone who has purchased a ticket for the 17th can rebook their ticket at the ticket desk of State Puppet Theater - Stara Zagora for

We are sorry to announce that the performance "Winter Tale" is cancelled from the competition and the program of Pierrot 2019 due to technical problems of Sofia Puppet Theater! Anyone who has already purchased a ticket for this performance can rebook it

The upcoming theatrical season of State Puppet Theater - Stara Zagora begins with a participation in three prestigious international festivals in Bulgaria and one in Turkey. After the series of performances at those puppet events, the coproduction of S

International Puppet-Theater Festival “PIERROT”, is a unique festival in Europe, awarded by the European Festival Association with an European Label for Importance and Innovation EFFE 2019-2020 (Europe for Festivals, Europe Festivals).

Dear friends, Despite the complicated economic situation, the shocking daily statistics and the extraordinary epidemic conditions our team has continued to work and create artistic treasures for our spectators. On Luly 22nd and 26th you can watch the p

Eight actors from State Puppet Theater - Stara Zagora play in Faust - a performance of State Opera - Stara Zagora. With the premiere of Faust on November 17th will be opened The Festival of Opera and Ballet Art 2022. Our actors manipulate totally 15 pu

Here are some photos from second day of PIERROT 2019. Photographer: Teodora Todorova

Here are some photos from the fifth day of PIERROT 2019. Photographer: Teodora Todorova

Here are some photos from the opening ceremony and the first day of PIERROT 2019. Photographer: Teodora Todorova

The "BURNOUT" performance of State Puppet Theater - Stara Zagora based on the idea of Veselka Kuncheva and Ina Bozhidarova and directed by Veselka Kuncheva, has been nominated for the IKAR 2022 Award in the category ACHIEVEMENTS IN PUPPETRY. The nominatio

More
State Puppet Theatre Stara Zagora processes information about your visit using cookies to improve site performance. By continuing to browse our site, you agree to the use of these cookies. Learn more OK